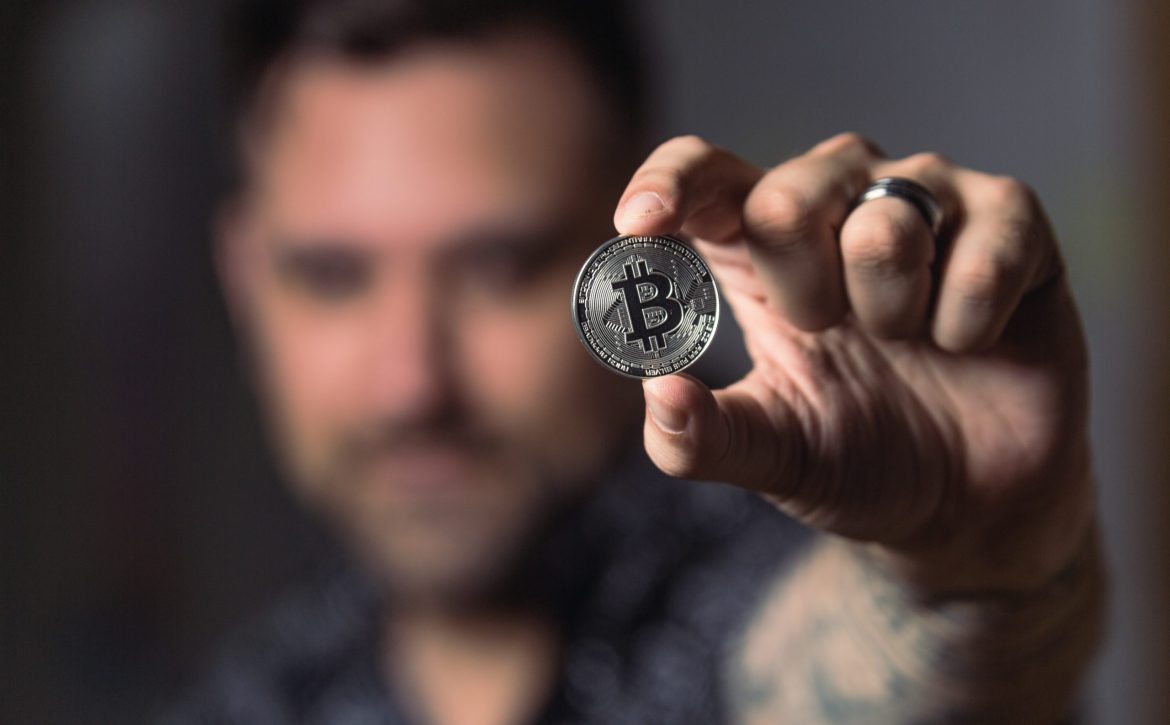 Does Your Portfolio Need Bitcoin? Maybe, but keep it to minimum.

*This piece was originally distributed via Morningstar Inc in the United States. We believe it has interesting perspectives for S.A. advisers.

Bitcoin investors have been on a wild ride lately. After dropping about 74% in 2018, the digital currency nearly doubled in price in 2019, and then nearly quadrupled during 2020. Trading volumes have also skyrocketed as individual investors have embraced cryptocurrencies through commission-free trading platforms such as Robinhood.

There are some arguments in favour of bitcoin as an investment, but there are also reasons to be sceptical. Overall, it has enough negatives that I would hesitate to carve out more than a small fraction of a portfolio for bitcoin.

The Case for Bitcoin

Bitcoin has been hailed as a transformative technology that promises to revolutionize the entire landscape of money and payments. In fact, the enthusiasm surrounding bitcoin is so intense that it borders on religious fervour. Bitcoin itself has even been compared with a religion, with its own set of doctrines, sacred texts, acolytes, and rituals.

Bitcoin proponents often argue that because only 21 million bitcoins can ever be mined, a permanently limited supply should support its value. It’s often viewed as an alternative to gold, which also has a limited supply but has a more definable intrinsic worth because it’s used for jewellery, industrial applications, and as a tangible store of value. Cryptocurrencies like bitcoin could potentially benefit from increased demand for secure international transactions, low-cost banking, and anonymous micropayments or general-purpose payments. The network effect also comes into play with bitcoin, as growth in usage should (theoretically) increase its value at an exponential rate. 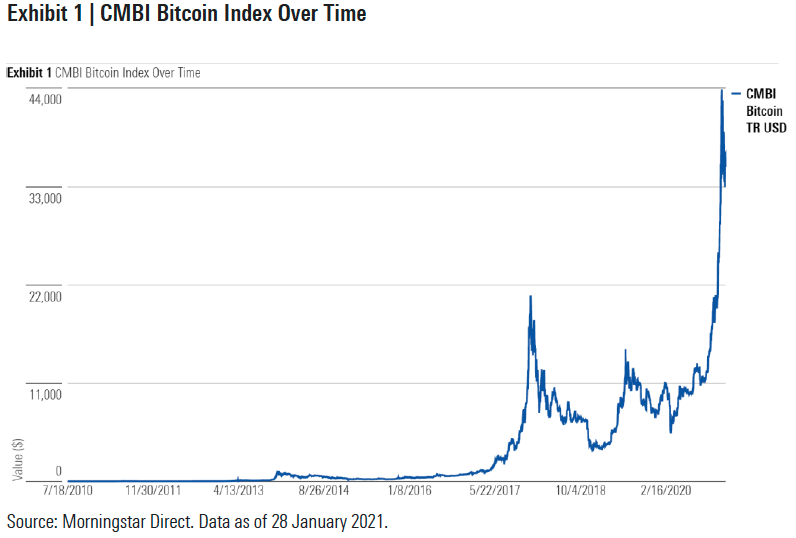 Bitcoin’s limited supply also makes it a potential hedge against long-term inflationary pressures. With the Federal Reserve printing money at an unprecedented rate, the market is currently pricing in a five-year breakeven inflation rate of 2.18%, which would be higher than the unusually benign inflation we’ve seen in recent years. Bitcoin has often (though not always) historically had a negative correlation with the U.S. dollar, which started losing ground in March 2020 after a generally strong upward trend over the previous decade. Bitcoin’s future value partly depends on widespread acceptance and usage as an alternative currency. Unlike traditional currencies, it’s not controlled by central governments. In that sense, it’s the ultimate insurance policy against weakness in the U.S. dollar or a collapse in mainstream financial systems.

The Case Against Bitcoin

But there are reasons to be sceptical. As a virtual asset that doesn’t generate cash flows, bitcoin has no intrinsic value. Its value depends largely on what people are willing to pay. When Guggenheim’s Scott Minerd was quoted in December 2020 claiming bitcoin could be worth as much as $400,000, bitcoin prices quickly escalated. But without a strong foundation to support an underlying value, asset prices can rapidly drop.

That’s exactly what happened in 2018, when the CMBI Bitcoin TR index dropped 74%. More recently, bitcoin’s price shed nearly 30% from its peak on Jan. 8 until briefly dropping below $30,000 on Jan. 27, 2021. Even intra-day pricing tends toward the extreme, with prices often swinging by double-digit percentages within the same trading day. These sharp price moves mean bitcoin owners must be prepared to “HODL” – hold on for dear life.

Bitcoin is often described as digital gold, but it hasn’t held up particularly well during periods of market crisis. In the fourth quarter of 2018, for example, bitcoin lost about 44% of its value, compared with about 14% for the broader market. When the novel coronavirus roiled the market from Feb. 19 through March 23, 2020, bitcoin lost about 38%, compared with 34.5% for Morningstar’s U.S. Market index. During weeks when the overall equity market posted negative total returns (over the period from August 2010 through the end of 2020), bitcoin notched positive results only about half of the time.

As mentioned above, bitcoin proponents often argue that limited supply should create a floor for bitcoin’s value. But while the supply of bitcoin itself is limited, there’s nothing preventing competing cryptocurrencies from emerging. There are already numerous bitcoin alternatives available, including Ethereum, Litecoin, Cardano, Bitcoin Cash, and Lumens, to name a few.

Fees and transaction costs are another negative. Coinbase, one of the most popular platforms for buying bitcoin, charges a spread of 0.5% plus a fixed or variable fee (whichever is greater) based on the investor’s location and method of payment. For U.S.-based investors, Coinbase charges fees of at least 1.49% (for purchases made through a bank account or Coinbase wallet) or 3.99% (for purchases made through a debit card). Fees for small-dollar purchases can be considerably higher. However, Coinbase doesn’t charge additional fees for the hosting and storage required to keep bitcoin assets protected from digital theft or other losses.

Accredited investors can also buy bitcoin through Grayscale Bitcoin Trust, an exchange-traded fund structured as a grantor trust. The fund, which has been operating since 2014, charges a 2% annual fee, which also covers storage costs. It has limitations on redemptions, making it impractical for investors who may need to make withdrawals. The fund also typically sells at a premium to bitcoin prices and doesn’t track the currency perfectly. Over the past five years, for example, the trust has posted an annualized market return of 115.3%, compared with 135.3% for the underlying index.

A competing firm recently started operating Osprey Bitcoin Trust, which is currently available as a private placement for accredited investors with a lower management fee of about 0.5%. However, investors are subject to a 12-month lockup period, compared with six months for the Grayscale offering.

Over the trailing three-year period ended in 2020, bitcoin’s meteoric rise could lead to a simple conclusion: The more, the better. Bitcoin showed more than four times as much volatility (as measured by standard deviation) as equity market indexes over the period. But because of its low correlation with the equity market, adding bitcoin didn’t increase volatility all that much. Even a 10% bitcoin weighting would have increased the portfolio’s standard deviation by a fairly moderate amount, as shown in the table below. From a portfolio perspective, higher returns more than offset the added volatility; Sharpe ratios increased in tandem with higher weightings in bitcoin.

The picture looks less favourable over the trailing 10-year period, though. Bitcoin’s standard deviation was more than 15 times that of the equity market, making it among the most-volatile assets in Morningstar’s database of 35,000-plus market indexes. As a result, both risk and returns increased with larger bitcoin weightings. Even a 1% weighting would have led to a sharp increase in standard deviation compared with an all-equity portfolio, as well as significantly worse drawdowns. Monthly rebalancing would have led to better risk-adjusted returns, but that approach might be impractical for many investors in light of bitcoin’s transaction costs. 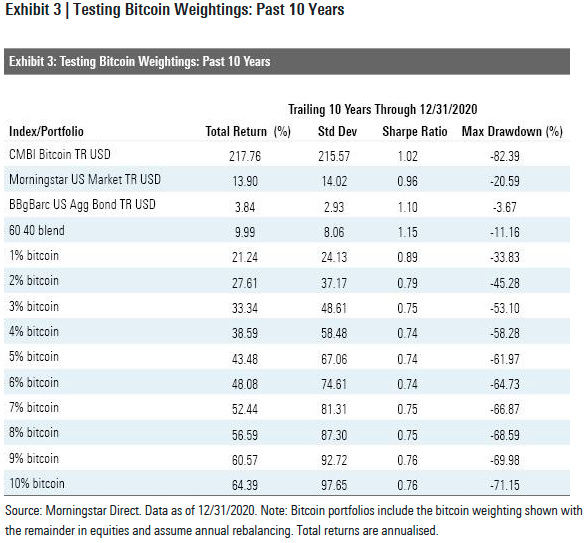 Given the divergence in results over different time periods, deciding on an appropriate bitcoin weighting partly depends on whether you think the future will look more like the recent past, or more like the trailing 10-year period. Much of bitcoin’s eye-popping 10-year record owes to an off-the-charts runup from 2011 through 2013, when the CMBI Bitcoin TR index posted annualized returns of more than 1,000% per year, including a gain of more than 5,300% in 2013 alone. These gains may not be repeatable, partly because trading volumes in bitcoin have increased nearly 3,000-fold since 2014. On the positive side, volatility has significantly decreased, although bitcoin’s standard deviation remains more than four times higher than that of the broader equity market.

It’s also worth noting that as bitcoin moves to the mainstream, it’s becoming less valuable as a portfolio diversifier. As shown in the chart below, bitcoin has had fairly low correlations with most major asset classes over the past three years. Correlations have been trending up, though. In 2020, for example, bitcoin had a correlation coefficient of 0.68 versus the S&P 500, compared with 0.32 for the trailing three-year period. However, its negative correlation with the U.S. dollar has grown even more pronounced, making it a potentially valuable hedge against continued softness in the greenback. 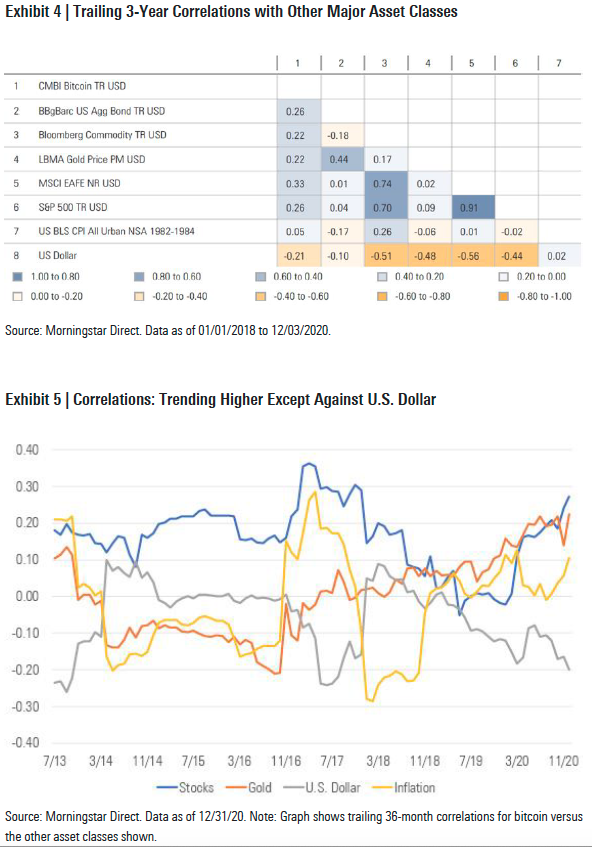 Overall, I’m sceptical about the case for bitcoin as an investment asset. Its popularity with momentum investors and speculative buyers makes it prone to pricing bubbles that will eventually burst. It’s also nearly impossible to pin down what its underlying value should be. As mainstream investors increasingly embrace bitcoin, its value as a diversification tool is diminishing; as a result, there’s no guarantee that adding bitcoin will improve a portfolio’s risk-adjusted returns, especially to the same extent it did in the past. However, there are some compelling arguments in favor of bitcoin as an alternative currency and as a commodity that can help support new technologies, such as smart contracts and more-efficient financial transactions with built-in encryption. For that reason, bitcoin is probably best used in (very) small doses as a hedge against weakness in the dollar and major disruptions in the global financial system.

Note: This article has been updated to remove a reference to Guggenheim Macro Opportunities (GIOIX) seeking SEC approval to invest up to 10% of its assets in Grayscale Bitcoin Trust (GBTC). After the article went to press, we were informed that this is no longer the case. We also revised the article to clarify that Osprey Bitcoin Trust is currently available as a private placement.

Since its original publication, this piece may have been edited to reflect the regulatory requirements of regions outside of the country it was originally published in.